As I mentioned before, we attempt, in the creation of this game, to portray as much an accurate picture as possible in terms of historical and archaeological information. In the introductory scene, which takes place in 13th century Bologna,  we will be using a scientifically based 3D reconstruction of the city, which was done by Cineca . The game itself takes place in roman Bologna, for which we have also a scientifically based 3D  reconstruction of the city, created by the VHLab in ITABC, CNR (Rome). The people in both Cineca and the VHLab are playing a very big part in the creation of the story in terms of what was possible and what was not in the relevant time periods in Bologna.

Once the hero, or the player is in roman Bologna, he/she is no longer viewing the city, but interacting with the environment. The environment is based on specific archaeological sites that were excavated and played a central part in the daily life in the roman period. The nature of the archaeological data is that it is almost never whole and you end up with a picture with many missing pieces (sometimes you just have a frame...). For this reason, some buildings could not make an appearance at all in the reconstruction and some will be displayed only from the outside, so as not to give false information. For instance, it is known that there was a temple for the goddess Isis in roman Bologna, but as exotic and interesting addition it could have been in the game, we hardly know anything about it's structure, so sadly, it cannot be displayed in the game. Another example for the challenge of "scientific integrity" in our game is the case of the basilica, of which only the foundations have survived. It was possible to reconstruct a general look according to the floor plan and similar buildings in other roman cities, but to show the interior for interaction purposes in the game would be misleading.

To summarize,  it is a question of where you draw the line - finding a balance between the actual archaeological information, the researchers' interpretation of it and the needs of the game's environment.

In the (long) time that has passed since my last post, which included some vacation time for the holidays, I have been working on the narrative for the game.

The subject of narrative and video games and whether a narrative even exists in video games has been long debated. The question lies mostly on the definition of narrative, a term that in the last 20 years has become very broadly defined (Juul 2001). However, when talking about adventure games, a narrative is part of the definition: "A video game in which the player assumes the role of a protagonist in an interactive story driven by exploration and puzzle solving instead of physical challenge" (Rollings and Adams 2006), or a more concise version: an adventure is the deterministic intellectual problem solving in the context of a story" (Newheiser 2008). 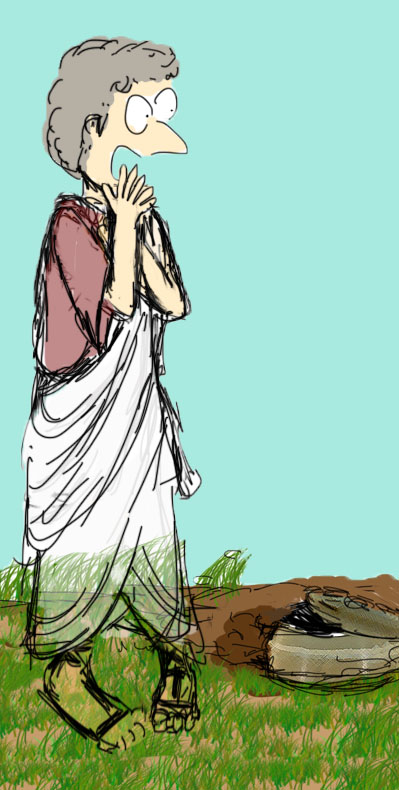 In our case, some aspects of the story such as location and time are predefined. The location - the city of Bologna and the time, or actually times - the protagonist's time of origin which is the 13th century CE. and the time he finds himself in, which is around the 2nd century CE. Both time settings, of course, effect the story in terms of what is possible and what isn't. For instance, one of the challenges we faced was trying to connect somehow the Medieval 13th century bologna with the 2nd century  Bologna by placing a roman object or element in the medieval setting, so that our hero would be drown to it. The problem here is the fact that in 13th century Bologna they didn't care much for roman artifacts or any of the old stuff we refer to as "antiques", so there was no reason to keep a roman artifact or to be drown to one.


To solve this issue we turned to the afterlife and gave the role of the roman representative to a ghost. Where is the ghost coming from and why? Well, without giving away the plot, lets just say that there is a dog, an urn and a somewhat paranoid roman ghost.

We need to keep the historic and archaeological information accurate, but there is nothing wrong with using fantasy and imagination. I think  players will not be mislead to think that ghosts were part of the daily life in the medieval or roman times, and if they end up believing in ghosts who am I to say that they are wrong...

Initially, the concept of the game was meant to evolve around the Etruscan period in Bologna (i.e. Felsina) but during an online meeting between the entire task force - Fraunhofer, Cineca and VHlab, it was decided to focus on the Roman and Medieval Bologna (i.e. Bononia).


When designing a game for cultural heritage, one is walking a very fine line between being an educator and an entertainer. But it is not a matter of choosing one over the other, but rather finding a way to embed the desired information into the game so there's no real distinction. Katy Meyers, an archaeologist who’s interested in the role of games for outreach and education in archaeology and cultural heritage has written in one of her replies to an article in the blog “Play the Past” :

“I think one of the major problems with archaeological games is that they use archaeology as a gimmick. I recently was gifted the Indiana Jones Game of Life. Needless to say, it did not add to my archaeological education nor was it actually any fun.
Of course, there are games like Dig! The Maya Project (http://digthemaya.org/) which attempt to take a more educational perspective. However, there is a dearth of actual fun. Games like this spread the misconception that an educational game has to be boring, or has to follow more traditional methods of transferring information such as through text only. Educational archaeological games need to find a way to integrate the learning. I’m often shocked at how much information I know about the world of Halo or the language of The Sims. The question is, how do we harness this unconscious fun learning?”

Well, I don’t think there’s a magic formula for this education & entertainment merger, but if we look at the kind of information we plan to impart through the game, I believe we will see it  is not so out of reach. Whether   we are dealing with archaeological material, historical texts, or both, what we have are stories, events, phenomena, each with its set of rules. For example, the method of creating a certain tool, the process of embalming in ancient Egypt, or the sitting arrangement in the Roman theatre,  all had a certain mechanism or a set of rules to them, and we can also look at more intricate systems, such as social structures, economic systems and so on… the rules of these events or systems can be used when designing a game by embedding them in the mechanics of the game.

I know, easier said than done, but certainly doable.  In our case, we’re dealing with historical and archaeological information about Roman and Medieval Bologna, two rather vast subjects, so we needed a more focused theme. And thus, five sites were picked, most of which are connected both to roman Bononia and 13th century Medieval Bologna: The roman bridge/Medieval street; The roman basilica/13th century soldiers residence area; Roman theatre; The Isis temple/Vitale and Agricola church and The roman forum.
It is of course not mandatory to visit the archaeological site which you intend to include in your game, but if there’s an option to do so, it is recommended, you never know what might inspire you… So I got on a train to Bologna (only 3 hours! ) and met Sofia (my supervisor) and the team at Cineca. Trying to think of what the game would be like, Sofia and I brainstormed into the wee hours of the night and came up with many ideas which I will not reveal (don’t want to ruin the game for you…) but we decided it would be a first person game with the characteristics of a quest. The next day Sofia took me on a personal guided tour in the archaeological sites that would be used in the game plus some visits to the lovely shops in the area. During our tour we met some of Bologna's finest who generously shared their knowledge of the sites with us. I only understood bits and pieces, as my Italian is rather basic, but Sofia gave me a summery at the end and it was very enlightening, so thank you kind people of Bologna! After our tour Sofia and I went to meet the team at Cineca where we held another online meeting with all the people involved and at the end I had guidelines and a general framework in which to create the narrative and a storyboard for the game.

That’s it for this entry.

Next time, a little bit about narratives and games…
Posted by Ya'ara Ilan at 11:55 AM No comments:

My name is Ya'ara, I have recently graduated my MA in Archaeology from Ben Gurion University in Israel, but before and along with my archaeology studies, I fiddled with animation, 3D modeling and game design, planning on combining them in one exciting package.

I am mostly interested in the stories extracted from archaeological and historical remains and how they can be implemented in games. Today, many (if not most) of the archaeological knowledge we have accumulated has been published in such ways that are either not accessible or unappealing to the public. As I see it, the raison d'etre of archaeology, very broadly defined, is to study the past and relay the results to the interested public, and you may be surprised (or not) at the great amount of people who are interested.

In short, the fruit of our labor is knowledge of the past and it should be shared in the most efficient way - games!

The V-Must mobility program offered a perfect opportunity for me to pursue this goal and I am now at the VHLab - The Institute of Technologies Applied to the Cultural Heritage (CNR-Rome), under the supervision  of Sofia Pescarin, as part of a team developing a game which will take the player adventuring through the streets of Medieval and Roman Bologna. The game will be accompanied by an Augmented Reality application for iPhone being developed by the Fraunhofer Institute for computer Graphics Research IGD in Germany.
Posted by Ya'ara Ilan at 6:35 AM No comments: